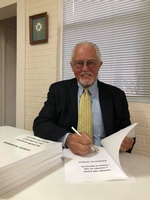 be·spoke
/b?'spok/
Adjective BRITISH
Meaning: made for a particular customer or user.

Robert M. Willingham, Jr., is a native of Washington, Georgia. He is the author of several books on his native Wilkes County, as well as works on Georgia and Confederate bibliography and sports history. He and his wife, Ginny King, have restored an 1873 home and are avid collectors of Georgia folk pottery.
Once known as the ''Golden Buckle of the Cotton Belt,'' Washington, Georgia, was chartered during the Revolutionary War and was witness to both the birth of two-party politics in Georgia and the last days of the Confederacy. Washington grew up into a sophisticated and cosmopolitan city in the antebellum South, and is today one of the state's most historic places.
During his tours, Robert “Skeet” takes you on a discovery of the Washington of days gone by. From the achievements of prolific leaders such as Robert Toombs and Garnett Andrews to the distinctive architecture of the city's earliest homes and buildings, Skeet brings the many treasured memories to life on his “Bespoke Tours”. Both longtime residents of Washington and visitors to the area delight in his collection of tales culled from the Mary Willis Library, the Washington Historical Museum, and numerous private collections. Coupled with informative background insights his tours are a true captivating pleasure.
For your Bespoke Tour and pricing call today.